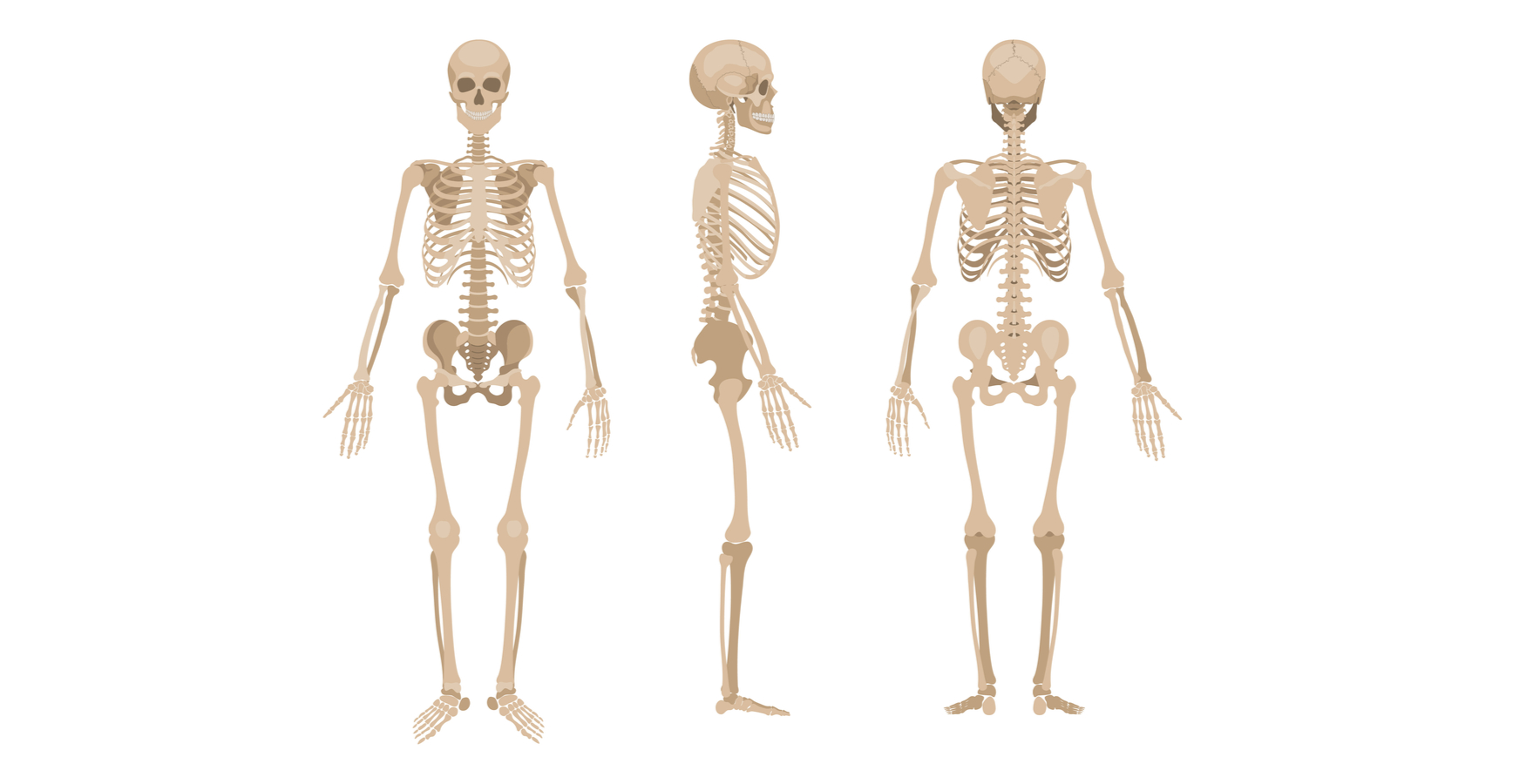 A simple understanding of sciatica – the anatomy involved

The anatomy involved in sciatica

The human body is hugely complex.  It comprises a skeleton, a nervous system, organs, skin, a circulatory system and many other parts.

It is the skeleton and the nervous system we need to focus on in order to aid our understanding of sciatica. 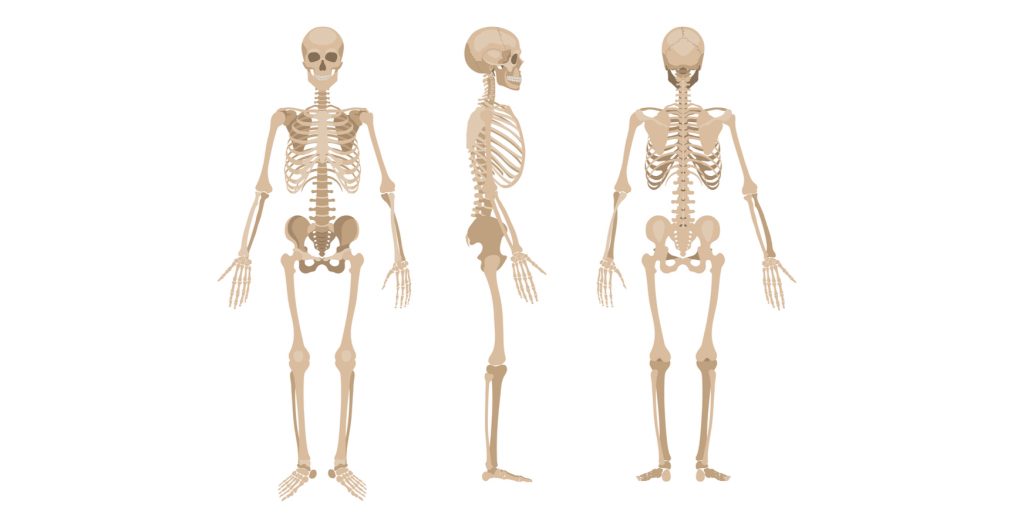 An adult human body has 206 bones, connected with a network of tendons, ligaments and cartilage. The bones fit together to form the skeleton.

This diagram shows nicely the backbone, or spine, within a human body. 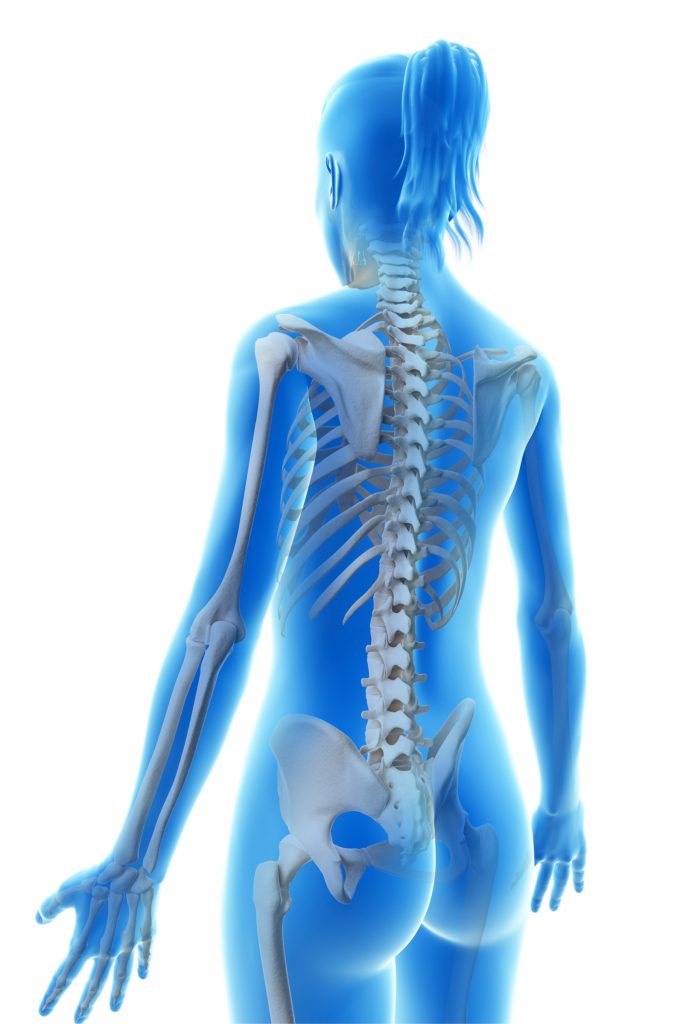 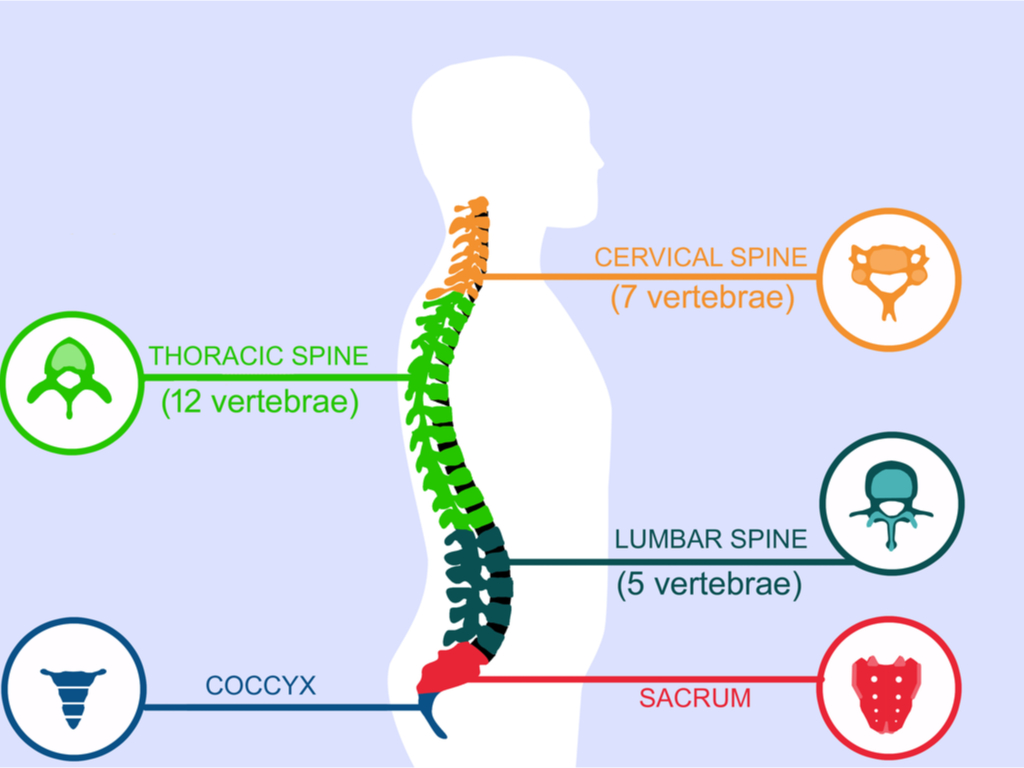 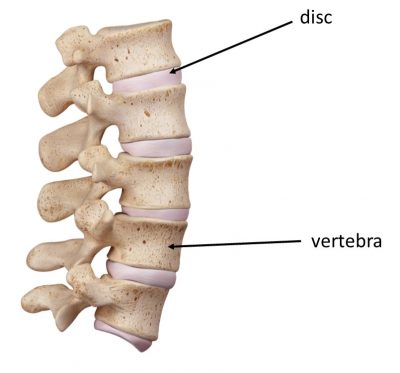 The spine is made up of bony vertebrae, which link together to form a strong moveable structure.  Between each vertebra is  a disc, which acts as cushioning and facilitates movement of the spine.

Each vertebra of the spine is given a number, as shown in the diagram below.  The relevant section for sciatica difficulties is the lumbar spine, which is L1 to L5, and the sacrum.  The sacrum is the bony part at the bottom of the spine, and is composed of five fused bones, of which the top bone is called S1.  On the left of this diagram you can see cross sections of the vertebra.  It is important to note the different shapes of the verterbra cross sections in the different spinal sections.  This might help when looking at other pictures online to work out whether you are looking at the relevant section of the spine or not.  This has caught me out more than once! 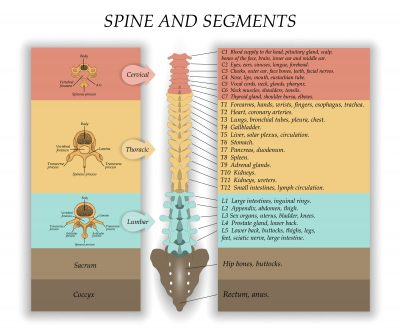 This picture shows in more detail how the lumbar spine fits onto the sacrum.  You can see that the bottom disc lies between the vertebrae called L5 and the sacrum bone S1.  The L5-S1 junction is a common area for symptoms to arise from.  It is thought this may be because a significant amount of load goes through this region.  This L5-S1 segment is called the lumbosacral joint.  It is a problem with the disc at this lumbrosacral joint that has caused my difficulties. 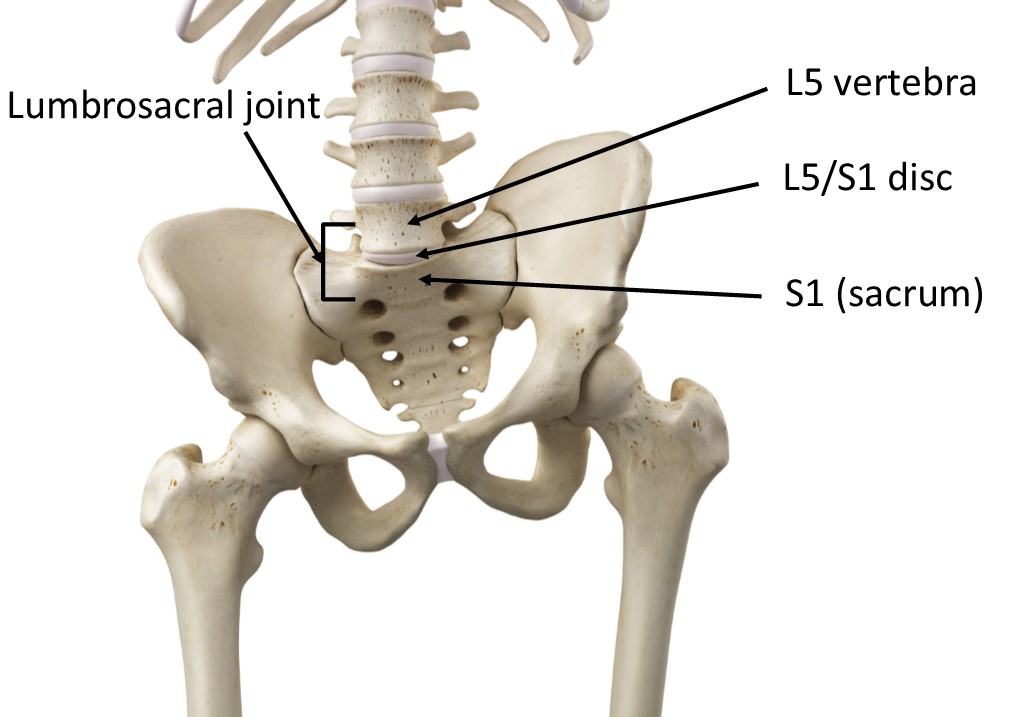 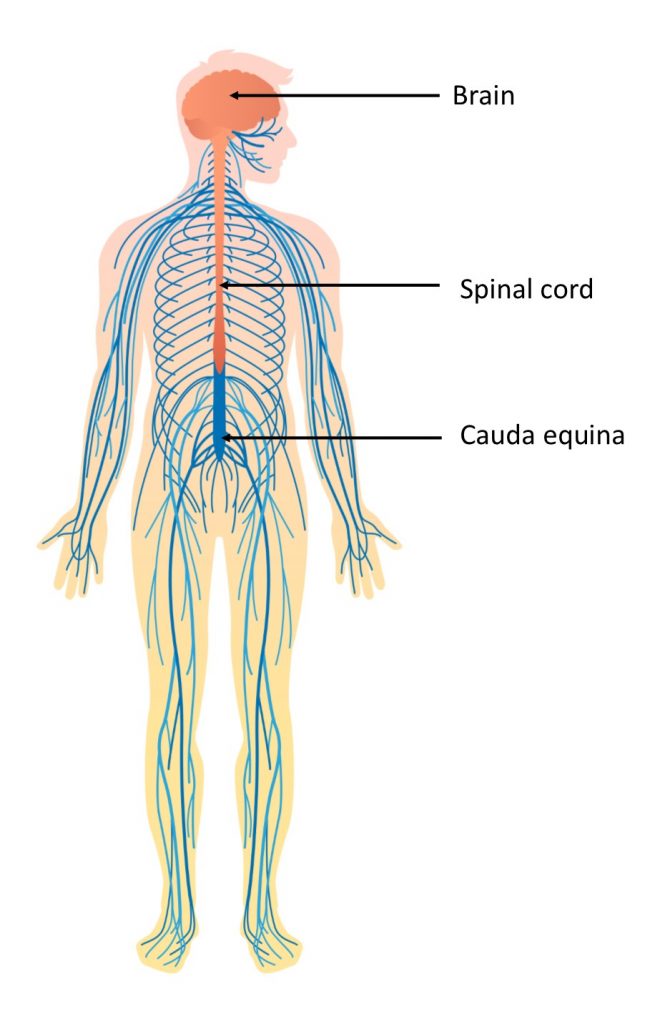 It is important to note in the diagram above that the brain and spinal cord are coloured in orange and the nerves and ganglia in shades of blue.  Before attempting to clean up this jigsaw piece I had erroneously assumed that the spinal cord goes all the way down to the bottom of the spine, but it doesn’t, it ends at the level of vertebrae L1-L2.  After the spinal cord terminates, the central nervous system continues as a bundle of nerves called the cauda equina.   The spinal cord is housed in a protective sac, called the thecal sac (often known as the dural sac), and this sac continues down to S2 in order to protect the nerves of the cauda equina.

The nerves of the cauda equina serve the lower half of the body, and branch out from underneath the spinal cord like a ‘horse tail’.  The latin name for ‘horse tail’ is cauda equina, hence it’s name.

On the diagram above you will see a dark blue section underneath the spinal cord, which is the continuation of the thecal sac.   This dark blue section of the thecal sac is the protective housing for the nerves which comprise the cauda equina, and contains the same fluid that bathes the spinal cord, the cerebro spinal fluid.  The cauda equina is made up of  paired nerve roots (sensory and motor), which are bundled together in one nerve root sheath.   Sensory nerves gather information about the environment (eg touch, temperature) and send it to the brain, and motor nerves tell muscles to contract, thereby making you move.  You will see that the nerves exit the thecal sac at different levels.  At each level there is a pair of nerve roots  contained in one sheath exiting left, and another pair of nerve roots contained in one sheath exiting right.

This diagram shows quite nicely where the spinal cord ends and where the ‘horse tail’, or cauda equina, of nerves start.  Unfortunately, the diagram doesn’t show the thecal sac that contains the horse tail of nerves. 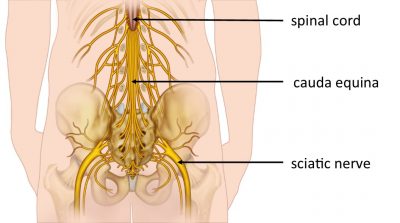 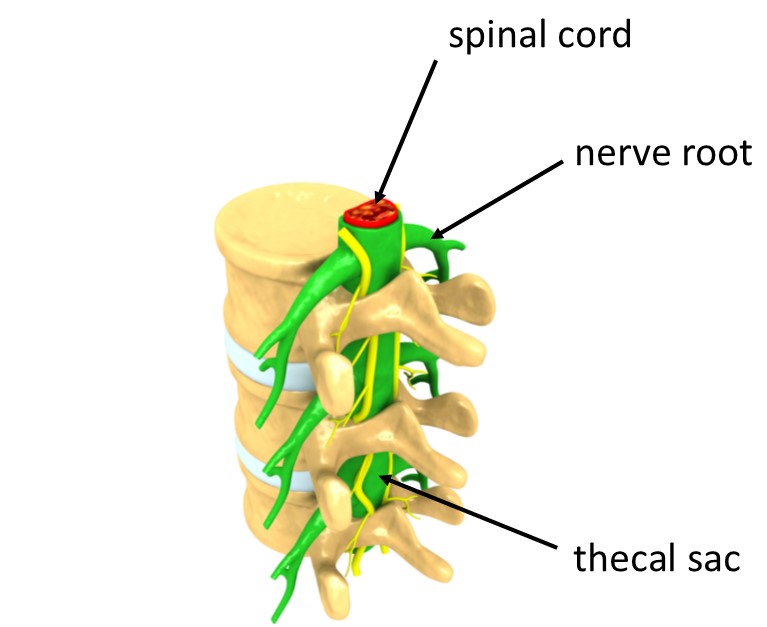 This is a diagram of a thoracic vertebra, rather than a lumbar one that we are particularly interested in, but it does show quite nicely how the spinal cord, inside the thecal sac, is housed in the vertebra.  It also shows nerves exiting between two vertebral segments, at the same level as a disc.  When a nerve exits the thecal sac it is called a nerve root.

The nerve roots that emerge from the sacrum include S1, S2 and S3.  The 5 nerve roots L4, L5, S1, S2 and S3 join together to form one long nerve, the sciatic nerve.  This nerve then travels down the back of each leg, branching out to provide motor and sensory functions to specific regions of the leg and foot. 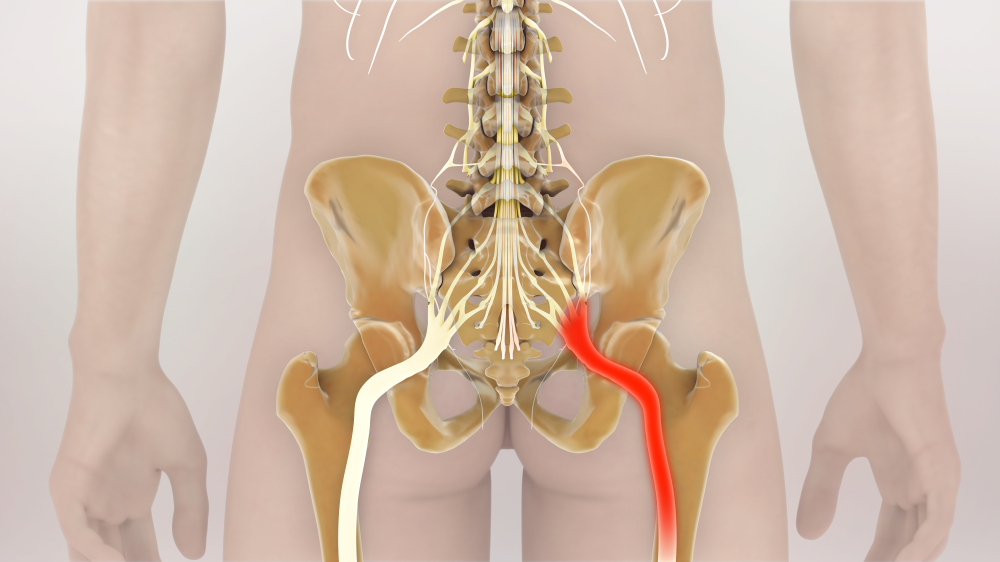 You can see in this picture how the five nerve roots join together to form the sciatic nerve (depicted in red).

The sciatic nerve runs from the lower back through the hips and buttocks and divides into other portions around the knee and continues to the feet.  The sciatic nerve is the largest nerve in the body.

If we look again at this diagram, which shows the nerves in the body, the sciatic nerve is the long dark blue nerve arising from the back, from the 5 nerve roots, and traveling all the way down the leg and into the foot. 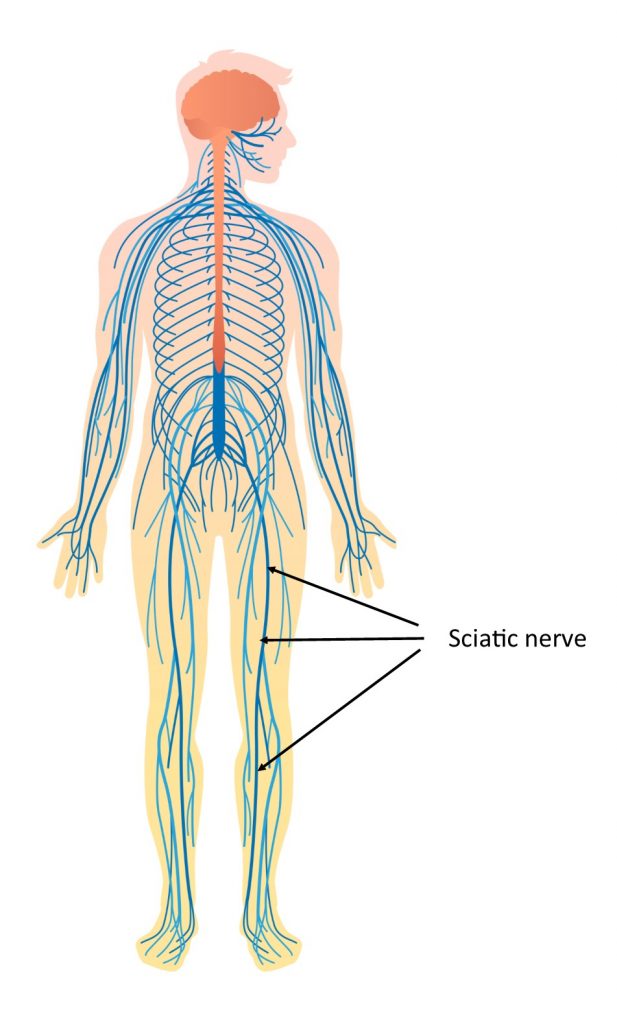 So there we have it, this is the basic anatomy we need to understand sciatica.

A patient's simple understanding of sciatica

How does sciatica feel?